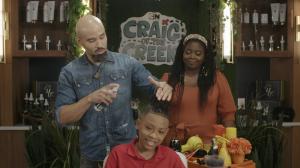 The finale episode of “My HAIRstory!,” the three-part hair tutorial featuring styles from Cartoon Network’s Emmy-, GLAAD- and NAACP Image Award-nominated series Craig of the Creek premieres on International Animation Day on Thursday, Oct. 28 at 3:00 p.m. ET/12:00 p.m. PT. Check out the “My HAIRstory! Episode 3 Teaser by clicking here.

Hosted by Instagram influencer Kim Kimble, a celebrity hairstylist with an impressive clientele roster including Beyoncé, Zendaya, Rihanna, Mary J. Blige, Oprah, and more, “Loc Love” celebrates one of the most popular and fuss-free hairstyles featured in Craig of the Creek. Loctician Joseph Barreto, a.k.a. thelocbarber, partners with Kimble to style and moisturize his son Josiah’s hair into a super cool look, a mohawk using the barrel roll method.

Each “My HAIRstory!” episode is inspired by a character’s hairstyle featured in Craig of the Creek and will be released on Kimble’s Instagram account. Fans are invited to interact with Kimble after the release of the episode by asking a question in the comments section of her IGTV post. The series will be recorded and available on Cartoon Network’s YouTube channel.

Craig of the Creek follows a precocious, animated character named Craig as he leads his best friends J.P. and Kelsey on comical journeys at their neighborhood creek, transforming everyday afternoons into thrilling expeditions through imaginative play. The series connects with viewers through its relatable characters and universal storylines, and also features authentic depictions of Black hairstyles.

The first episode, “Wash Day,” premiered on National Hair Day on Oct. 1 and the second episode, “Protective Styling,” celebrated Afro-Latina hair in recognition of Hispanic Heritage Month on Oct. 15. Both episodes are available to view on Cartoon Network’s YouTube Channel.

Catch an all-new Craig of the Creek Halloween special on Monday, Oct. 25 at 7:00 p.m. ET/PT. Full episodes of Craig of the Creek are also available online and via the Cartoon Network App. Seasons 1 and 2 are now streaming on HBO Max.

Throughout the month of October, fans are invited to join the conversation and share their favorite Craig of the Creek hairstyle by tagging Cartoon Network on Instagram, TikTok, Twitter, and Facebook, and using the hashtags #MyHairStory, #CraigOfTheCreek and #CartoonNetwork.