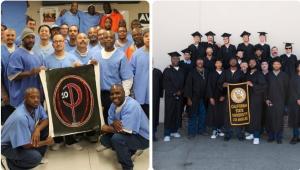 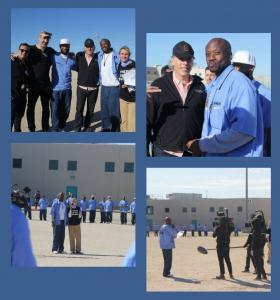 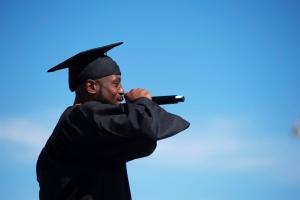 LOS ANGELES, CALIFORNIA, USA, October 24, 2021 /EINPresswire.com/ — On October 5, 2021, Samual Nathaniel Brown, co-founder of the Anti-Violence Safety and Accountability Project (ASAP), creator of the 10P program, and author of the constitutional amendment proposal, The California Abolition Act (ACA 3), recently became one of the first along with 24 other men to graduate with a bachelors in communication from Cal State LA’s Prison B.A. Graduation Initiative on the yard at California State Prison Los Angeles County in Lancaster California.

In 2015, Cal State LA became the only university in California to offer in-person classes inside a maximum-security prison to inmates seeking to earn a bachelor’s degree in organizational communication. This opportunity was made available through the Second Chance Pell federal pilot program which aims to reduce recidivism rates and make communities safer by educating incarcerated Americans so they can receive jobs and support their families after they are released from prison.

"Other schools prepare you to execute a task,” Brown said. “This school prepared us to change the world.” After being incarcerated for over two decades, Brown will soon become the 13th student in Cal State LA’s prison education program to be released from prison.

Brant Choate, Director for CDCR’s Division of Rehabilitative Programs spoke to the graduates and stated, “This program is so unique—it is one of the only of its kind in the country and the nation has been watching you. Because of your efforts, you have set the stage and example that this works. This opportunity is going to be available to thousands in the future in California and across the country. Thank you for all you’ve done.”

“I am struck by the resilience and dedication you have demonstrated as you embarked on your educational journey,” Cal State LA Provost and Executive Vice President Jose A. Gomez said to the graduates. “You didn’t give up, you didn’t quit. I speak for everyone at Cal State LA—the faculty, staff, administrators, alumni, and our community—when I say that we are so proud of you.”

Brown is a shining example of how education can not only lead to rehabilitation but can also positively impact the communities he once helped to harm. In 2014, Mr. Brown developed “The Theory of Emotional Illiteracy Based Criminality” which connects Adverse Childhood Experiences with people choosing criminal behaviors as coping mechanisms.

Taffany Lim, senior director of the Center for Engagement, Service, and the Public Good at Cal State LA said the college cohorts are mentors to people on the yard. “Some of these guys may never get out of prison," Lim says. “It's still a worthy investment because they've become huge advocates for education. Now their friends and family—oftentimes individuals who never saw college education for themselves—are pursuing higher education. They're mentors to people in the yard. They're like, 'Hey, don't make the same mistake I did. Go to school, find education, transform your life. Make a difference.'"

Kamran Afary, Cal State LA assistant professor considers Brown an educator for the programs Brown has created and the work he does for the prisoners. “He was a magnificent student and is an educator as far as I’m concerned,” Afary said. “He is a remarkable person and his ‘Theory of Emotional Illiteracy-Based Criminality’ really has had an amazing impact on real rehabilitation and self-healing here at Lancaster.” In February 2020 Samual Brown along with his wife Jamilia Land collaborated with Fritzi Hortsman, founder of Compassion Prison Project to co-executive produce the documentary "Step Inside The Circle: Childhood Trauma Behind Bars" where Samual, Fritzi and the men on the "Honor Yard" delve into the depth of adverse childhood experiences and trauma in a prison setting.

"When I spoke to Mr. Brown, our conversation led to a discussion about childhood trauma and his depth of knowledge about the impact of childhood trauma and toxic stress. This led me to visit the two classes he facilitates: “10P” on Friday evening and on Saturday morning.” stated Hortsman in a support letter to the California Board of Parole.

Hortsman went on to state that, “When Academy Award Nominee Rodrigo Prieto volunteered his services for one day, I sprung into action…..Mr. Brown went above and beyond my request. Not only did he assemble and recruit 250 men for the circle, he rehearsed them, he made sure all the obligatory permissions and forms were filled out, helped me choose a group of men to interview after the circle and made sure everything was taken care of from the inside. We could not have done this without the express help from Mr. Brown. Producers are problem solvers. Producers see what needs to be done and then figure out how to get it done. Mr .Brown is a natural problem solver and a natural producer. I look forward to working with Mr. Brown when he is released and continue our collaboration on “Childhood Trauma Behind Bars” and on the many other projects that are sure to arise from our combined efforts. "

Journalist Robert J Hansen spoke with Samual Brown on October 13, 2021, in an exclusive Q&A follow-up interview that can be found here:
https://tinyurl.com/3pk29zuw