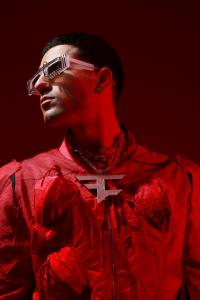 FaZe Clan, the lifestyle, media and digital behemoth and world’s most prominent gaming organization, announces their newest member FaZe Kaysan, notably the organization's first ever in-house music artist and gamer hybrid. In true FaZe Clan fashion, FaZe Kaysan was announced with the most star-studded video to ever hit BREAK the internet. The introduction sees Kaysan being knighted into FaZe alongside all of his closest friends, who happen to be some of the world’s favorite influencers, content creators and artists like Diplo, Charli & Dixie D'Amelio, Addison Rae, Noah Centineo, Noah Beck, Taco, Adin Ross, Madison Beer, StassieBaby, Kyle Kuzma, Nikita Dragun, Larray and Luka Sabbat to name a few. Click HERE to check it out!

FaZe Kaysan: producer, DJ, creator and artist embarks on the FaZe lifestyle as not only an artist, but also as a gamer, asserting himself as an inimitable multi-hyphenate whose impact fissures through music, video games and culture at once. FaZe Kaysan stands out as a rare talent whose original music with GRAMMY® Award-winning hip-hop titan Future is equally as compelling as his Call of Duty streams and gaming content.

“FaZe Clan has always supported artists and we have always believed in the crossover between music, lifestyle and gaming. From day one helping artists grow has always been a thing for FaZe Clan, from ILLCAMS, to our personal montages and our vlogs,” said FaZe Clan founding members FaZe Rain and FaZe Temperrr in the announcement video. “The FaZe roster has grown over the years and really laid the foundation for the next chapter in content. We are super excited about this next move. One of the hardest grinders out there Kaysan outworks most as a DJ, gamer and producer/artist. We are so happy and so thankful for the opportunity to welcome him as a member of the team and a collaborator. Everyone please welcome FaZe Kaysan! Let’s go!!”

“I’ve been playing video games forever, so joining FaZe is a dream come true,” says FaZe Kaysan. “Because this process has been underway for nearly a year, I’ve become so close to this crew — they’re like family to me. As both a gamer and an artist, I couldn’t be more grateful for FaZe believing in me and supporting both of my passions equally. Can’t wait for everyone to hear the music!”

FaZe Kaysan will explode onto the scene with his debut single “Made A Way” feat. Lil Durk & Future which was co-produced with Wondagurl [Kanye West, Drake, Travis Scott, JAY-Z] and will be released tomorrow at midnight EST via United Masters alongside a music video directed by whitetrashtyler which drops Wednesday at 12pm EST / 9am PT. The song is already gaining buzz after Charli D’Amelio posted two TikTok videos to the track this weekend, which have collectively garnered over 13 million views.

As Kaysan began creating music, his love for gaming also continued to grow. He began to attract a following on Twitch, playing franchise favorites such as Call of Duty, Grand Theft Auto, NBA2K and more. Everybody from Adin Ross to members of FaZe Clan raided his streams, attracted by both his sheer talent as a gamer, sense of humor, and subtle mystique. FaZe Clan became instantly intrigued by his quiet influence and his name floated around mutual social circles for months, piquing curiosity about him and inspiring them to want to know more eventually leading to this moment where Kaysan joins FaZe Clan as an inimitable multi-hyphenate.

The past year came with a lot of firsts for FaZe Clan. Earlier this summer, FaZe Clan became the first gaming organization to grace the cover of Sports Illustrated, pass 1 billion views on Giphy and team up with McDonald’s USA. Additionally, FaZe Clan released a handful of first-of-its-kind merchandise collaborations with iconic brands such as Takashi Murakami, Xbox and OpTic Gaming. More recently, FaZe Clan teamed up with Seth Rogen for a HFC livestream event marking the first time Rogen has worked with a gaming organization.

About FaZe Clan:
Since its inception in 2010, FaZe Clan has established itself as the world’s most prominent and influential gaming organization known for its disruptive original content and hyper-engaged global fanbase of over 350 million combined across all social platforms. FaZe Clan holds an unrivaled position at the epicenter of gaming, sports, culture and entertainment, driving how the next generation consumes content, plays and shops. Their roster of 85 influential personalities consists of world-class gamers, engaging content creators and a mix of talent beyond the world of gaming, including NBA star Ben Simmons, Lebron “Bronny” James Jr and Lil Yachty. The organization’s unmatched esports division includes nine competitive teams in Call of Duty League (Atlanta FaZe), Fortnite, FIFA, PUBG, PUBG Mobile, Rainbow Six, VALORANT, Rocket League and CS:GO with dozens of world championship trophies among them. In addition, FaZe Clan has become a sought-after fashion and lifestyle brand through an inspired apparel line and limited-edition collaborations with partners including Champion, NFL, Manchester City FC, Lyrical Lemonade, Kappa, CLOT, LA Kings, and more. Follow us @FaZeClan, @FaZeApparel and @FaZeUpdate.