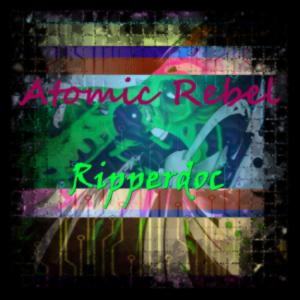 USA, July 28, 2021 /EINPresswire.com/ — After an incredible groundbreaking year that released an audible kraken into the Electro realm over the course of two records and multiple singles/videos dropped online, including the Proper Propaganda EP & Here Come The Riders EP in 2020 – the insatiable digital vibes of Atomic Rebel are already taking over 2021 with a massively memorable milestone early on in its legacy – the brand-new full-album Ripperdoc.

With eight riotous cuts steeped in savagely innovative and exploratory EDM sound, Ripperdoc is a sonic thrill-ride that verifiably proves Atomic Rebel is on a whole other level completely of its own, second to none when it comes to the art of supplying compelling sensory entertainment & radiantly pure energy. A virtual glimpse into the future of sound – Ripperdoc is designed to take listeners on a trip unlike any other, engaging the mind, body & soul as one, through music that is felt every bit as much as it is heard. From explosive EDM drops & vibrantly melodic breaks, to Atomic Rebel’s inherently creative tendencies to proudly roam beyond the fringes of Electro in search of discovering all-new ideas & sounds yet to be experienced – Ripperdoc wields real versatility, swagger, and style through powerfully gripping diversity.

Immaculately produced to ensure not a single solitary second wastes anyone’s time, Atomic Rebel flexes remarkable finesse & stunning hybrid vibes guaranteed to beam through speakers from the lefts to the rights. An ambitious and adventurous set of eight cutting-edge EDM tracks that hit hard through their low-end rhythms & grooves, while captivating with sparkling sound soaring on the surface – Ripperdoc contains a sensational lineup of new tracks destined to find a permanent home on playlists, worldwide.

Drawing from a wealth of technique, talent, and virtual inspirations including legendary videogames like Mass Effect and Cyberpunk 2077, Songs like The Singularity, which is a musical representation of the monks in the cyberpunk 2077 game, Stellar standouts with Tali Schnapps, a clever wordplay which makes the song even more memorable.

Atomic Rebel is firing on all cylinders throughout Ripperdoc, supplying listeners with the essential soundtrack they need to bring the heat to the summer of 2021. Every bit as inventive as it is dynamic, the twists, turns, and transitions of Atomic Rebel’s latest cuts reveal the ability to thrive in multiple dimensions of sound and generate addictive songs with wild original ideas that raise the stakes for the Electro genre altogether, setting the trends for the rest to follow…if they can keep up.

In just the few short years since bursting into the EDM circuit, Atomic Rebel has been entirely unrivaled.

From cheat codes to beast mode, Ripperdoc is verifiable proof that Atomic Rebel is surging throughout the Electro scene for all the right reasons, and that the extraordinary buzz surrounding this project has become more than justified already. Featuring the legendary vocals of solo-artist Eclipsys on the mic as a guest-star in collaboration for “Chrome Killas,” with seven stellar digital instrumentals alongside it that display the X-factor talent of Atomic Rebel – Ripperdoc has all the vibrant and electrifying sound that the people are genuinely craving & more, with all the hallmarks of a bulletproof record that will always stay 100% fresh. Out & available on every major music platform online now – join Atomic Rebel this year for the official release of Ripperdoc, and prepare for a set-list geared to dominate charts & playlists in 2021.