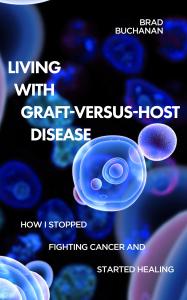 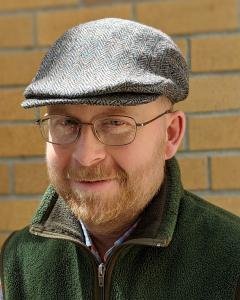 Profound and relatable; written with humor, honesty and hope. ”
— Be The Match®

SACRAMENTO, CA, UNITED STATES, June 24, 2021 /EINPresswire.com/ — Launching today with Zoom event sponsored by Capital Books in Sacramento, LIVING WITH GRAFT-VERSUS-HOST DISEASE: HOW I STOPPED FIGHTING CANCER AND STARTED HEALING by Brad Buchanan, PhD, is an intimate and groundbreaking account of managing a sometimes-devastating disease. No other current books combine a synoptic account of GvHD symptoms and treatments with a patient’s own story of surviving.

Any interested party can register for the event at CapitalBooksOnK.com/Events. The launch begins at 6 PM Eastern/3PM Pacific.

LIVING WITH GRAFT-VERSUS-HOST-DISEASE tells the story of the author’s survival against the odds, outlines his often rocky path to long-term recovery, and offers unique and important insights into acute and chronic GvHD. Using poetry as a touchstone, it draws on the author’s own experiences as a two-time blood cancer survivor and stem-cell transplant recipient to encourage GvHD patients to move beyond the “warrior” mentality promoted by much of the current cultural discourse surrounding disease, treatment, and survivorship. It also advocates a full understanding of the current best practices in the treatment of GvHD, an attitude of acceptance and emotional openness, and the practice of writing as a self-healing activity.

Authorities in the field praise the book:

Brad Buchanan has produced a detailed narration of his personal battle with lymphoma and ultimately graft-versus-host disease (GvHD). He takes a no-holds-barred approach that leaves little to the imagination. His command of the language and mix of prose and poetry bring to life the good, the bad and the terrifying components of his journey with a rare and particularly intense form of GvHD.
—Joseph M. Tuscano, MD, Interim Director of Stem Cell and Bone Marrow Transplantation and deLeuze Endowed Professor of Medicine, UC Davis Cancer Center

While recovery from transplant is unique for everyone, first-hand experiences help to tear down the walls of isolation. We are incredibly grateful to people like Dr. Buchanan who share their personal story. His is both profound and relatable; written with humor, honesty and hope.
—Be The Match®

Dr. Buchanan provides a frank and engaging account of his personal journey through blood cancer treatment and the repercussions of living with graft-versus-host disease (GvHD) as a result of that treatment. He unmasks both the physical and mental impact of GvHD on himself and his caregivers and provides a reminder that becoming cancer free is not always the end of the pilgrimage.
—Emily Hopewell, PhD, Director of Cell and Gene Therapy Manufacturing, Assistant Professor of Clinical Medical and Molecular Genetics, Indiana University

Graft-versus-host disease (GvHD) remains a significant cause of morbidity and non-relapse mortality for allogeneic hematopoietic stem cell transplantation (AHSCT). This book tells a story of courage and overcoming the formidable challenges of acute and chronic GvHD. It will help physicians, nurses, and scientists genuinely understand the story of patients’ difficulties living with GvHD. As a scientist working on uncoupling GvHD from GVL (graft-versus-leukemia), I encourage every citizen to read this book, which ought to convince our politicians and policymakers to support more research into GvHD.
—Dr. Mobin Karimi, Assistant Professor of Immunology and Microbiology, SUNY Upstate Medical University

A native of Canada, Brad Buchanan holds degrees in English Literature from McGill University (BA, 1994), the University of Toronto (MA, 1995), and Stanford University (PhD, 2001). He taught British and Postcolonial Literature, as well as Creative Writing, at Sacramento State University (where he also served as English Department Chair) until his retirement in 2016. His poetry, fiction, and scholarly articles have appeared in more than 200 journals, among them Canadian Literature, the Journal of Modern Literature, The Portland Review, The Seattle Review, Twentieth-Century Literature, and The Wisconsin Review. His first two published book-length collections of poetry (The Miracle Shirker, Poet’s Corner Press, 2005) and Swimming the Mirror: Poems for My Daughter, Roan Press 2009), both received Writer’s Digest awards. His third book of poems, The Scars, Aligned (A Cancer Narrative) appeared from Finishing Line Press in February, 2019. He has also published two scholarly books.

Dr. Buchanan was diagnosed with a rare form of T-cell lymphoma in February 2015 and, after chemotherapy and radiation treatments, underwent a stem cell transplant in 2016. The stem cell transplant, which resulted in an unexpectedly acute case of graft-versus-host disease (GvHD) and a near-total loss of vision, also entailed 129 days in the hospital’s transplant unit and a lengthy recovery period at home. In late 2016 he was diagnosed with B-cell lymphoma induced by the Epstein-Barr virus; after participating in a clinical trial, he was declared cancer-free in 2017, and he is currently still in remission. He has also recovered his eyesight after having corneal transplants and cataract surgery in each eye. He still suffers from chronic GvHD, which has prevented him from returning to teaching, and now devotes his time to writing, as well as to facilitating workshops for writers dealing with issues related to illness, disability, and recovery. He lives in California with his wife, Kate Washington, and their two daughters.

About Armin Lear Press
Armin Lear was founded in 2019 with the purpose of publishing books connecting people with ideas that make our lives richer, more fulfilling, and happier. Its founders have 26 years of publishing experience. The company headquarters is near Boulder, Colorado with a production office in Arlington, Virginia. Armin Lear is a member of the Independent Book Publishers Association.