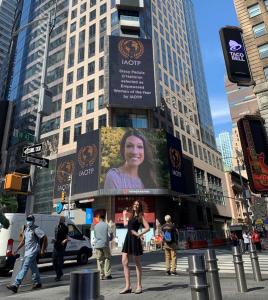 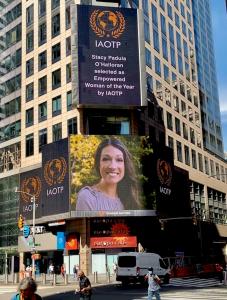 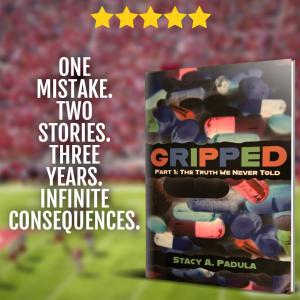 PLYMOUTH, MASSACHUSETTS, UNITED STATES, June 24, 2021 /EINPresswire.com/ — Stacy Padula, author, entrepreneur, and CEO of Briley & Baxter Publications, was awarded with Empowered Woman of the Year by the International Association of Top Professionals (IAOTP) on June 18, 2021. Padula, of Plymouth, Massachusetts, was honored on a billboard jumbotron in Times Square as part of the recognition. Padula’s photo was featured on the famous and iconic Reuters building in Times Square, directly next to where the ball drops on New Year’s Eve.

Paula is the author of three different book series: Gripped, MLH, and On the Right Path. She is also the CEO and founder of Briley & Baxter Publications, LLC, as well as South Shore College Consulting & Tutoring and Two Cuddly Dachshunds Shop, which raises funds for animal rescues.

Padula is also a co-owner of BLE Pictures LLC. Currently, her Gripped book series is being adapted for TV by Emmy-winning producer, Mark Blutman in collaboration with BLE Pictures.

The International Association of Top Professionals (IAOTP) is a boutique networking organization that works to handpick professionals from different industries to honor at their awards ceremonies and galas. Members need to be asked by the President or nominated by a distinguished honorary member to join. This most recent honor marks 2 years in a row for being named Empowered Woman of the Year by IAOTP. Padula was also previously awarded with Top Educational Consultant of the Year in 2019.