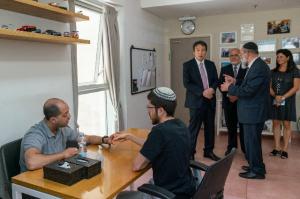 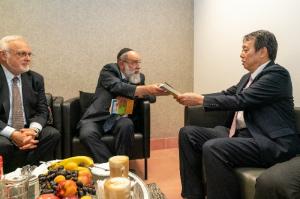 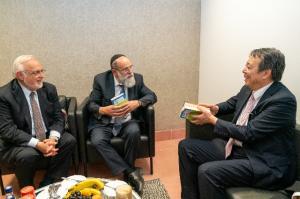 I am honored that my book has been so well received in Japan. It is amazing to see how people from different countries and backgrounds share common human experiences and relate to Shalva’s story”
— Rabbi Kalman Samuels

JERUSALEM, ISRAEL, June 24, 2021 /EINPresswire.com/ — Rabbi Kalman Samuels’ memoir about his son who was rendered blind and deaf during infancy has received international publicity; most recently published in Japanese and circulated among Japanese government personalities and sold in bookstores across Japan.

“I am very delighted and moved to visit the Shalva Center and I am looking forward to reading Kalman Samuels’ book,” said Japanese Ambassador to Israel Koichi Mizushima following his visit with Samuels. “I am grateful to Shalva for the opportunity to come and see this amazing center and their work from up close.”

Samuels' memoir called Dreams Never Dreamed, tells about his son Yossi who was injured during infancy and became blind, deaf, and acutely hyperactive and the incredible story behind his breakthrough to communication which inspired the development of Shalva, the organization established by Samuels and his wife Malki that has become one of the largest centers for disability care in the world. The $70 million Shalva National Center serves thousands of people with disabilities and is an internationally recognized leader in the field of disability care with inclusion projects, like the Shalva Band, inspiring millions across the globe.

Today, a Japanese delegation, headed by Japan’s Ambassador Mizushima and Rabbi Abraham Cooper Associate Dean of the Simon Wiesenthal Center in Los Angeles, visited the Shalva Center in Jerusalem to meet Kalman Samuels and to experience first-hand his life’s work which has inspired many Japanese readers, among them prominent activists and policy makers. The Japanese delegation also met with Yossi Samuels and had an inspiring conversation mediated with sign language in the palm of his hand.

“It is all about making connections,” says Rabbi Cooper. “The fact that a Japanese Ambassador is coming to visit an Israeli non-profit for disability care is an important milestone. I believe it is just the beginning of various partnerships and exchange of knowledge between Israel and Japan in this field.”

Samuels’ memoir was translated to Japanese by Kinue Tokudome, a Japanese writer and human rights activist who was inspired by her visit to Shalva in 2019. Tokudome says there is a great deal to learn from Shalva's pioneering role in advancing the care and inclusion of people with disabilities and believes that the people of Japan will find important relevance in the book's messages of hope and human dignity.

After translating Samuels’ book on her own initiative, Tokudome tweeted about it on her Jews and Japan Twitter feed. The Japanese version of Samuels’ book was published by Japan-based publisher Isaku Taniuchi earlier this month and is now available in bookstores and online in Japan.