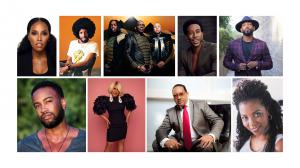 WASHINGTON, DC, USA, May 11, 2021 /EINPresswire.com/ — In celebration of Black Music Month, BNC and Café Mocha, the #1 nationally syndicated radio show for ‘women of color,’ announced today the Salute THEM Awards ‘soundtrack of our lives’ will broadcast on BNC Sunday, June 6 at 10:00 P.M. ET. The awards will feature several musical tributes and will be co-hosted by Café Mocha Gracie Award Winners Yo-Yo, Loni Love and “Ain’t Too Proud” Broadway star Saint Aubyn from the new National Museum of African American Music (NMAAM) in Nashville.

This is a first for the Salute THEM Awards, airing on the newly re-launched BNC, which is available in more than 52 million households with linear agreements in place with major providers including Xfinity (Ch 1116), DIRECTV (Ch 342), Spectrum, DISH (Ch 361), and also available on over 200 million internet-connected devices via partnerships with Amazon Fire TV, Pluto, Roku, Tubi, Vizio, Samsung and more.

The Salute THEM Awards ‘soundtrack of our lives’ is the second in a unique, “Saluting Our Culture,” awards series that recognizes the indelible impact of those who serve as a catalyst for change through their artistry. The awards will be the first-ever to take attendees on a historical journey of Black music curated from the National Museum of African American Music. In 1979, President Jimmy Carter decreed June as “Black Music Month” in recognition of Black Music’s remarkable contributions to American culture.

“Café Mocha is ecstatic to pay homage to this year’s honorees, who collectively exemplify a body of creative forces from legendary musical treasures to the architects of contemporary music today,” says Café Mocha creator and executive producer Sheila Eldridge.

“We applaud the efforts of Café Mocha Radio in providing a platform to voice Black-owned businesses and experiences,” said Alva Adams-Mason, Group Manager, Multicultural Business Strategy, and Dealer Relations for Toyota Motor North America. “Toyota is proud to support the impressive trajectory of the Salute THEM Awards from in-person engagements to virtual shows to now broadcast.”

“BNC is excited to partner with Café Mocha to present the Salute THEM Awards and pay tribute to a fantastic collection of honorees,” said Princell Hair, CEO of BNC. “This event marks the first of many partnerships and presentations that will allow BNC to honor and showcase Black excellence and the myriad of contributions that people of color have made to American culture.”

Presented by Toyota North America and AARP, the Salute THEM Awards honors the phenomenal contributions of Black creatives. Through a longstanding collaboration with AARP, Café Mocha is proud to bring together the National Museum of African American Music and Salute THEM Awards, as they “Celebrate Black Joy” in music.

The Salute THEM Awards benefits the Mocha Cares Foundation to support housing and services to combat homelessness and domestic violence through mentorship programs.

For more information on the “Saluting Our Culture” awards series, contact Sheila Eldridge at 201-887-5100 / sheila@milesaheadentertainment.com.