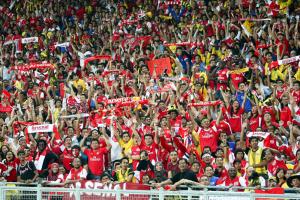 With the collapse of the European Super League, football fans everywhere rejoice!

Talks and plans of a European Super League amongst the elite clubs of Europe have collapsed after massive global backlash.

Football is nothing without fans.”
— Sir Matt Busby

NEW YORK CITY, NEW YORK, UNITED STATES, April 22, 2021 /EINPresswire.com/ — At the time of writing (Wednesday, April 21st, roughly 10:00am EST), nine of the twelve “founding” clubs slated to join together and form the notorious European Super League have pulled out of the plan completely. All English football clubs (Arsenal, both Manchester teams, Chelsea, and Liverpool), as well as the Milan duo (rivals AC and Inter Milan), and finally Spanish club Atletico Madrid have publicly announced their departure from the ESL. It appears to be only a matter of time before the remaining clubs (Real Madrid, FC Barcelona, and Juventus) also publicly admit defeat and departure as well.

These announcements come in addition to notable club changes and departures at both executive and managerial levels. For example, Manchester United has announced that it’s Executive Vice-Chairman, Ed Woodward, has resigned from his position. Calls from fans and club supporters are also targeting Real Madrid President Florentino Perez, and Arsenal owner Stan Kroenke. At this time, no formal announcements have been made regarding the future of either.

What can be said about the swift demise of the European Super League? First of all, that the opinions of consumers (or fans) truly do matter to these global institutions (soccer clubs). It’s important to look at the ESL fiasco with a financial or business lens because this perspective led to the creation of the ESL to begin with. Ultimately, it appears that the backlash and negative brand associations these clubs were facing would cause more of a financial loss than the new revenues the ESL could recuperate. It would be naive to assume these clubs pulled out because it was the “right thing to do” morally and for the good of the sport.

Let’s take a look at one specific European football giant who decided not to partake in the ESL competition. Paris St. Germain (PSG), the most commercially successful club in France. PSG was bought several years back by Qatar Sports Investments and has received financial injections in order to revitalize the club, make it competitive, attract quality players, and build the PSG brand. It has worked tremendously. PSG currently boasts one of the best sides in all of Europe, has a rapidly growing international fanbase, and has some of the sports largest and rising stars (Neymar, Mbappe, Icardi, etc). PSG is concerned about growing their brand and their reputation as a fashionable and successful club. With more fans comes more attention and more revenue. Had PSG joined the ESL, and received the backlash any of the “founding” clubs received, it would have been as though they took a step five years back. All of the goodwill they have generated amongst fans since their project initially started, would have been for nothing. In fact, PSG’s decision to not participate initially was met with so much positive fan reaction, they are now the favourites to win the current UEFA Champions League (with the other three remaining teams being ESL “founding” clubs).

The European Super League was an attempt for historic clubs to monopolize football’s viewership and secure themselves massive forms of revenue for years to come. Rather than trying to modernize and update themselves, as PSG has done, the 12 “founding” clubs attempted to exclude hundreds (perhaps) thousands of other clubs from their echelon of football. Ultimately, the fan backlash and global uproar caused will leave some consumers upset with the clubs, which may in fact negatively affect revenues (viewership, shirt sales, merchandise) in the short term.

Many fans and critics of the ESL are calling it an attempt to “Americanize” football in Europe. This is not at all far from the truth either. Considering three of the six English clubs involved have American owners (Stan Kroenke of Arsenal, John Henry of Liverpool, and the Glazer family of Manchester United), and the general concept of the league itself being extremely similar to that of American leagues (NFL, NBA, NHL), Europeans are pointing the blame finger at “greedy American investors”. JPMorgan Chase, one of the financial backers for the project, has since received an ethical ranking downgrade from “adequate” to “non-compliant”, truly reflecting the nature of the ESL and how it would have affected consumers and fans of the sport.

It appears fans have won… for now. However, attempts to continue to monetize the sport and maximize financial efficiency for the clubs will always be at the top of the list for their executive teams. Football clubs are no longer simply clubs, but massive organizations and businesses. They employ thousands, outside of the eleven players on the pitch, and can be viewed as economic engines in their subjective regions and cities. In the era of globalization, football clubs are no longer strictly community affairs. Instead they are international brands, and as such they will strive to grow by any means necessary.

Want to learn more? Visit us at The Financial News to get the latest on market news, stock movements, economic policy, and more from the world of finance.

Written by Nicolas Minardi of Mrkt360.