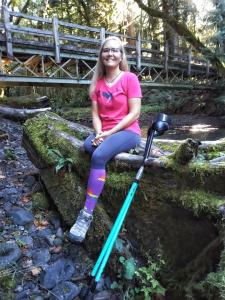 Dana Lawson is a Port Angeles amputee, cancer survivor, and victim of domestic abuse. In June she will complete the North Olympic Discovery Marathon to raise awareness and funds for other survivors. Photo by Colton McCoy.

Dana Lawson, an amputee and survivor of domestic abuse, will turn her pain into purpose by running the Discovery Marathon, raising funds for other survivors.

PORT ANGELES, WA, USA, March 4, 2021 /EINPresswire.com/ — Port Angeles resident, Dana Lawson, is a person living with cancer, an above-the-knee amputee, and a survivor of domestic abuse. This June, Lawson will compete in the North Olympic Discovery Marathon, a point-to-point trek from Sequim to Port Angeles, to raise awareness and support for Unbounded Horizons, a new outdoor healing program for domestic abuse survivors.

"My aim is to be a living, breathing, running model of what it means to turn pain into purpose," said Lawson, who is the founder of the award-winning educational nonprofit Nature's Academy.

Fusing her her background in education with her personal experience as a survivor, Lawson recently launched Unbounded Horizons, which utilizes the healing power of the natural environment and group support to help domestic abuse survivors develop more confidence, self-compassion, and self-worth. Conditioned behaviors such as helplessness and shame are unlearned and participants leave the program empowered with new skills to successfully rebuild their lives.

"This work is so incredibly important to me," said Lawson. "As a survivor, an educator, and a devotee of the outdoors, I truly believe that by spending time in nature we can rediscover the vastness of our own potential. I started Unbounded Horizons to help other women do just that."

Lawson will run the North Olympic Discovery Marathon on her beloved forearm crutches, SideStix. Her hope is to inspire others with a new vision of what is possible for survivors everywhere.

"Life has thrown many obstacles into my path; my legacy will be that I've turned those obstacles into opportunities. My work now is empowering other survivors to see what life can look like on the other side of the pain, to trust in themselves once again, to strive to reach their own unbounded horizons."

Donations to support Lawson's run can be made via the Unbounded Horizons website (www.unboundedhorizons.org), and are fully tax-deductible. Unbounded Horizons is a program of Nature's Academy, which is a 501(c)3 nonprofit organization.