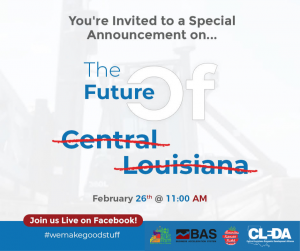 CLEDA has what they describe as a “big announcement” which may significantly impact Central Louisiana.

ALEXANDRIA, LOUISIANA, UNITED STATES, February 22, 2021 /EINPresswire.com/ — On February 26, the Central Louisiana Economic Development Alliance (CLEDA) will be hosting a virtual event. CLEDA has what they describe as a “big announcement."

You're invited to join CLEDA live on Facebook on February 26th at 11:00 AM. By attending this event, you will learn more about:

CLEDA invites you to join them LIVE to hear the big announcement and plans for the future. Larkin Simpson, CLEDA’s Vice President of Major Employers, states, “I am incredibly proud of the impact that CLEDA has made on the Central Louisiana community, and I am excited to see what the future has in store.”

Join CLEDA at 11:00 AM on Friday, February 26th, live on Facebook. Learn more about their community impact online at cenla.org.