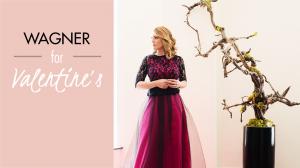 We feel this is a perfect time to offer this Wagner double bill to our current fans and introduce ourselves to new audiences looking for a special way to celebrate Valentine’s weekend at home.” ”
— Tom Wright, Vancouver Opera General Director

“In this surprise addition, we are delighted to be able to include members of our Vancouver Opera Orchestra in our unique digital season,” said Tom Wright, Vancouver Opera General Director. “We have not performed Wagner since our 2001 production of The Flying Dutchman and feel this is a perfect time to offer this work to our current fans and introduce ourselves to new audiences looking for a special way to celebrate Valentine’s weekend at home.”

Siegfried Idyll and Wesendonck Lieder are two of the most regularly performed non-operatic works by Wagner. Wagner composed the symphonic poem, Siegfried Idyll, as a surprise birthday serenade to his wife Cosima, the daughter or Franz Liszt, after the birth of their son Siegfried in 1869. She awoke on Christmas day in their villa in Lucerne to the opening bars of music. In the Wesendonck Lieder, Wagner sets five poems by Mathilde Wesendonck to music. This work was created while he was working on Tristan und Isolde. In 2007, the Wesendonck Lieder was performed in a recent arrangement for chamber orchestra by Ronald Kornfeil.

Leslie Dala last programmed and conducted Wagner during the bicentennial of the birth of both Verdi and Wagner in a special performance in 2013. Audiences will remember Krisztina Szabó from past Vancouver Opera productions as Donna Elvira in Don Giovanni, Sesto in La clemenza di Tito, and Musetta in La bohème at the Queen Elizabeth Theatre.

Viewers can sign up and will be able to access this free performance on digital.vancouveropera.ca on February 13 at 7:30 p.m. After the initial broadcast, the performance will remain on the site and can be accessed until the end of the season, June 30, 2021.

For more information about the 2020–2021 Digital Season and how to subscribe, please visit digital.vancouveropera.ca. Subscribers are encouraged to watch this special performance.

Vancouver Opera acknowledges that we work and perform on the unceded and traditional territory of the Musqueam, Squamish, and Tsleil-Waututh First Nations. All performances and casting are subject to change.