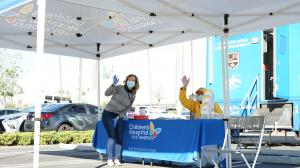 A Volunteer Minister at the blood donation sign-in table reminds those participating to keep in the protocols to protect everyone from the virus. 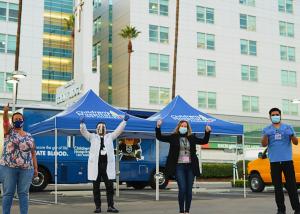 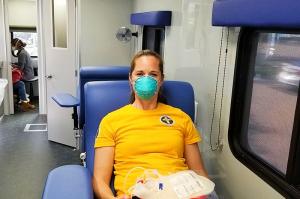 A Scientology Volunteer Minister, who donated blood at a drive at the beginning of the pandemic last year

Blood donation plays a vital role in the L.A. Children’s Hospital’s ability to serve the community—even more now with the pandemic than in previous years.

LOS ANGELES, CALIFORNIA, UNITED STATES, January 27, 2021 /EINPresswire.com/ — Children’s Hospital Los Angeles is one of the biggest hospitals for children in the nation. Each year:

The hospital depends on the community to save young lives.

“Our patients need approximately 2,000 units of blood and blood components each month as part of the life-saving care,” the hospital states on its website.

To provide these units to their patients:

* The hospital needs to collect blood from approximately 800 blood donors per month.

* Nearly 90 percent of the blood transfused at Children's Hospital Los Angeles comes from its donor center.

Learning of a shortage, in part caused by the pandemic, the Church of Scientology of Los Angeles hosted the hospital’s bloodmobile for remote donation collection.

“We put the word out to the local community in East Hollywood,” says Susanna Johansson, Public Relations Director at the Church of Scientology. “So many people took part—our own parishioners and many East Hollywood neighbors—there was terrific community support. By the late afternoon with all volunteer donators showing up like clockwork, socially distanced, we were proud to make the quota set by Children’s Hospital. It’s so important to us to support what they do.”

Rocio Hernandez, blood recruitment coordinator for Children’s Hospital, thanked the team. “The Church of Scientology has been really supportive in raising awareness for blood drives. I am grateful for this partnership and looking forward to continue the collaboration in this new year.”

The Church of Scientology Los Angeles urges anyone who can to organize Childen’s Hospital blood donations. Anyone wishing to do so is welcome to contact the Church for tips on how to make it successful and safe.

The iconic headquarters of the Church of Scientology on Sunset Boulevard is configured to serve Scientologists in their ascent to higher states of spiritual freedom, and as a home for the entire community and a meeting ground of cooperative effort to uplift people of all denominations.

The Church of Scientology Los Angeles was featured in the first episode of Inside Scientology on the Scientology Network. It premiered in March 2018, when Scientology ecclesiastical leader Mr. David Miscavige launched the network that airs on DIRECTV 320 and it is available on-demand there and through Scientology.tv.