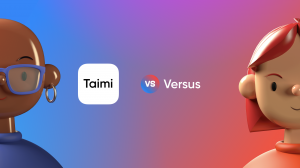 LAS VEGAS, NEVADA, UNITED STATES, January 19, 2021 /EINPresswire.com/ — Taimi enhances its in-app livestreaming with the launch of Versus Battles. The feature allows the platform’s users to start friendly competitions with random people while livestreaming. The “conditions” of each battle are up to the participants and can be determined on the fly.

The new mechanic is an answer to several major requests from Taimi’s community:

• Allowing the platform’s diverse community of LGBTQ+ people to express their views and share their talents with a bigger audience.
• Allowing the Streamers to grow their following on the platform faster.
• Increasing the number of Diamonds the Streamer can collect after each livestream.
• Adding more variety to streaming entertainment mechanics.

Versus Battles consist of 3 rounds, 3 minutes each, with 10-second breaks. The winner of each round is determined by the viewers who can vote for the Streamer they root for (Red or Blue) by sending them gifts. The gifts represent viewers’ appreciation of the Streamer. The Streamer who wins two rounds is the winner of the Versus Battle.

After each Versus Battle is over, both the Winner and the Streamer who lost receive a certain amount of Diamonds. The number of Diamonds received by each participant is determined automatically by the app’s algorithm, with the Winner’s reward being substantially higher.

Jake Vygnan, COO at Taimi, says, “Versus Battles open up a huge potential for livestreaming — the key element of Taimi as a social platform. It also allows our Streamers to showcase their creativity and talents to their fullest, as the ways to compete are unlimited! They can dance, sing, lip-sync, draw, or even discuss deep philosophical ideas. You name it! We see Versus Battles as the next step in helping our users find new friends or dates and build rapport more effectively. The feature will allow content creators on Taimi to grow their popularity faster, and serves as a more entertaining and engaging way to find new connections on Taimi.”

Another streaming feature introduced to Taimi 2 months ago is Live Duet, which allows users to tune in and co-host other people’s livestreams. Live Duet is a versatile tool that helps bring variety to the dating and networking experience on the app by interacting with the audience in a more personal way.

Taimi launched livestreaming in late August 2020. During September-December 2020, over 550k unique streaming sessions were launched on Taimi, with the total duration surpassing 15,6 years’ worth of streaming.

—
About Taimi: Taimi is the world’s largest LGBTQ+ platform that features a social network and dating app. Taimi offers the safest and most secure user experience on the market — with its several verification layers, 24/7 profile moderation, PIN/Fingerprint/Face ID, and live support.
The platform’s fundamental policy is zero-tolerance for judgment, discrimination, hate, or aggression.
Taimi is free to download. Taimi XL subscription provides access to features unavailable or limited in the free version of the app.