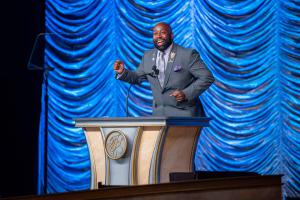 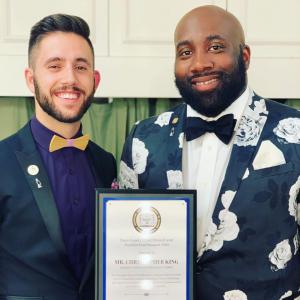 With a united effort, the goal of eradicating social injustices, human trafficking and more can be accomplished here in our own backyard.”
— Christopher King

TAMPA, FLORIDA, UNITED STATES, September 30, 2020 /EINPresswire.com/ — Christopher King, who was appointed as President of United for Human Rights’ Florida Chapter in November of 2019, was honored as the Bay News 9’s Everyday Hero on Monday morning, the 25th of September, for his dedication towards ending human trafficking and helping youth in the Tampa Bay area.

In King’s acceptance speech at United for Human Rights’ Volunteer Recognition Awards Banquet in November he said: “With a united effort, the goal of eradicating social injustices, human trafficking and more can be accomplished here in our own backyard.”

Since November, Chris King has tirelessly worked at doing just that. He has delivered seminars to students at schools across Pasco and Hillsborough counties; he’s also taken the entire Pinellas County Job Corps student body through the Youth for Human Rights curriculum; and just last month he delivered civil rights training to 400 Raymond James staff.

After an anonymous citizen of Tampa Bay submitted King for the nomination, Bay News 9 contacted him for an interview and surprised him with the award.

The interview featured King’s work as the Founder of The Gentlemen’s Course, a co-ed, non-profit organization that teaches youth proper etiquette and attire, as well as anti-human trafficking efforts and signs of human trafficking to look out for. The feature also covered his involvement with United for Human Rights as its Florida chapter President, leading the movement of human rights education for all of the Tampa Bay area.

United for Human Rights is an international non-profit, non-religious educational program based on the United Nations Universal Declaration of Human Rights. Its purpose is to teach youth their human rights and create valuable advocates for tolerance and peace. United for Human Rights is one of eight humanitarian programs the Church of Scientology supports. It was Scientology Founder, L. Ron Hubbard who said, “Human rights must be made a fact, not an idealistic dream.”