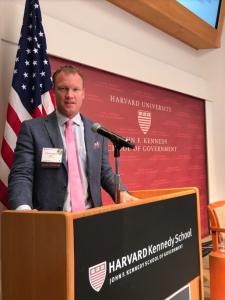 DESTIN, FL, UNITED STATES, September 24, 2020 /EINPresswire.com/ — The National Small Business Association has been a U.S., staple for more than 80 years. It serves as a representing body for owners of small businesses in terms of providing resources, information, and communication with government offices and the media. Christopher Rohe, recently welcomed to the NSBA's leadership council, discussed the importance of the NSBA and its grassroots effort.

The NSBA currently includes more than 65,000 small businesses across all 50 states. Every industry is represented in the organization in some way, and small business owners have enjoyed the NSBA's representation for more than eight decades. Christopher Rohe explained that the NSBA is made up of a number of leadership council members who represent small businesses before major governing bodies, including the White House, congress, federal agencies, and more.

"Small businesses have created more than 65 percent of new jobs since 1995," Christopher Rohe said. "Small business owners are constantly working to improve this country, and they deserve to be properly represented."

Christopher Rohe explained that many small business owners are so busy working to help their businesses thrive, they don't have time to go to every town hall meeting, contact their congressmen, or be involved in every major legislative event. The role of advocates like Christopher Rohe is to make sure these hardworking Americans are represented the best way possible.

Christopher Rohe added that some major priority issues facing the organization right now include the costs of health care, the complexity of the tax code for small businesses, reduction of the national debt, and cybersecurity threats among others. The NSBA is currently requesting that President Donald Trump show his support through authorizing and providing appropriate funding for a White House Conference on Small Businesses within the next couple of years.

Christopher Rohe is a retired United States Air Force Veteran, Top Graduate of the United States Air Force Academy, holds a Masters Degree in Public Policy from Harvard’s John F. Kennedy School of Government, past board member and President of numerous national executive business development and alumni councils, sought after national government speaker and serial entrepreneur – promoting new, novel and transformative solutions to the government in the areas of rapid construction, next generation IT, advanced manufacturing and accelerated contracting promoting “Silicon Valley for the Soldier, Wall Street to the Warfighter and Gurus in the Government.”