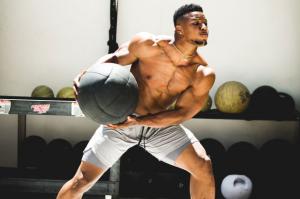 The 23-year-old is a living highlight reel, from displaying his jaw-dropping lower-body power on squats to producing insane throws from his knees.

LOS ANGELES, CA, UNITED STATES, July 30, 2020 /EINPresswire.com/ — Since entering into the NFL, New York Giants running back Saquon Barkley, has become one of the best running backs in the league. It's certainly clear to understand why he's such an icon after watching his new display of crazy strength, illustrated by a breathtaking jump out of his pool.

We've seen Barkley demonstrate his athletic ability during the off-season already. The 23-year-old is a living highlight reel, from displaying his jaw-dropping lower-body power on squats to producing insane throws from his knees.

While his teammates may have relaxed this weekend, Barkley has found a way to inspire us all yet again through a viral video posted from SportsCenter. The 6-foot running back, standing in his pool, exploded from the bottom of the pool through the water and landed on the edge without ever exhibiting a sign of effort.

We definitely did not see too many of Barkley 's huge plays in 2019. In reality, that's how he lost time with a high-ankle sprain and his skills were hampered by the condition upon returning.

We are anticipating great things from Barkley with good health on his side this season. Having erupted in his rookie season for 2,028 scrimmage yards, we wouldn't be surprised if he entered the plateau again in 2020 and will win All-Pro honors along his NFL journey.

It is no surprise that Saquon is back so quickly in tip top shape as he has been focusing on training for the 2020 season for months now. The New York Giants running back was seen back in March when he released a video squatting a giant amount and going through a variety of other workouts. Barkley is starting his third NFL season, stopping at none to make it the finest yet. They don’t call him “SaQuads” for nothing.