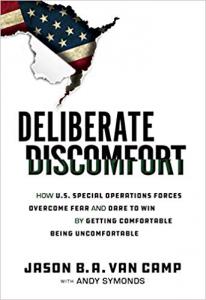 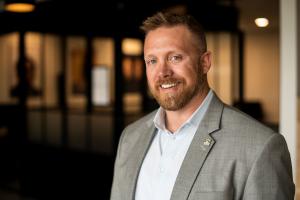 ~Amazon.com #1 bestseller shows how embracing discomfort enables winning on the battlefield, in the boardroom, and in life~

This book provides leadership and life lessons that will stay with me for the rest of my career and life. Every leader should read it.”
— Washington Redskins head coach Ron Rivera

WASHINGTON DC, UNITED STATES, February 26, 2020 /EINPresswire.com/ — What are the real lessons of war? And can those lessons be applied away from the battlefield? Jason Van Camp and his team of Special Forces combat veterans not only answer it, but relay lessons learned under fire to show you how in his new book “Deliberate Discomfort-How U.S. Special Operations Forces Overcome Fear and Dare to Win by Getting Comfortable Being Uncomfortable.”

Readers can follow Jason’s inspiring journey as a new Special Forces leader searching for leadership lessons from some of the most decorated combat veterans in the United States military. Hear from Medal of Honor recipient Florent Groberg about how his training prepared him to tackle a suicide bomber, and how fellow Medal of Honor recipient Leroy Petry’s never-surrender mentality gave him the strength to grab an enemy grenade and throw it, losing his hand but saving his teammates’ lives. Together, these and other incredible true stories in Deliberate Discomfort paint a picture of how extreme circumstances and life or death situations can guide us all in our business and personal lives.

Virginia native Jason Van Camp attended and played football at West Point before earning his U.S. Army Ranger and Special Forces tabs. Major Van Camp then served as a Detachment Commander with 10th Special Forces Group, deploying multiple times to war zones in the Middle East and Africa, receiving three Bronze Stars, one with Valor. He now lives in Utah with his wife and children and is the Executive Director of www.warriorrising.org, which empowers U.S. military veterans and their immediate family members by providing them opportunities to create sustainable businesses, perpetuate the hiring of fellow American veterans, and earn their future.

Deliberate Discomfort: How U.S. Special Operations Forces Overcome Fear and Dare to Win by Getting Comfortable Being Uncomfortable is now available at Amazon.com, Barnes and Noble and wherever books are sold from publisher Ballast Books.

Praise for Deliberate Discomfort has been pouring in from all corners:

Former Secretary of the Department of Veterans Affairs and longtime Proctor and Gamble head Robert A. McDonald says, “Deliberate Discomfort provides an intensely practical and enlightened path which challenges us to break out of our comfort zones. It will undoubtedly be lauded by both military and non-military readers alike as a powerful catalyst for individual change.”

Television and film actor and retired Marine Lt. Colonel Rob Riggle calls Deliberate Discomfort “Straight up authentic. For anyone that has ever wanted to overcome fear and do more in their life, Jason Van Camp doesn't just tell you to do it, he shows you how to do it. I have a renewed appreciation for the power of the human mind to dare to win.”

Frank W. Abagnale Jr, portrayed by Leonardo DiCaprio in the film version of his best-selling book “Catch Me If You Can” calls Deliberate Discomfort “Gripping. Authentic. Engaging. Prodigiously researched, carefully argued, and gracefully written… a masterpiece.”

Washington Redskins head coach Ron Rivera says, “This book provides leadership and life lessons that will stay with me for the rest of my career and life. Every leader should read it.”