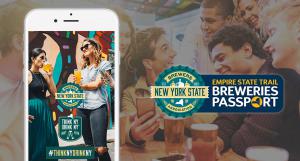 This new feature will bring growth and economic development to the craft beer industry and state of New York.

When New York State proposed the Empire State Trail passport program to us, we knew Brewers Marketing would understand what we needed and get right on top of it.”
— Paul Leone

BOCA RATON, FLORIDA, USA, November 15, 2019 /EINPresswire.com/ — Brewers Marketing, the custom mobile app platform for the craft beer market, is upgrading its popular mobile app for the New York State Brewers Association (NYSBA) with a new beer passport program to promote the 750-mile Empire State Trail. With the upgraded app, users visiting any of the over 200 craft breweries along the trail will be able to check in and earn points that can be redeemed for Empire State Trail-branded t-shirts, growlers, glasses, and more. The updated app is scheduled to release early 2020.

The Empire State Trail, a joint collaboration between the New York State Canal Association and the NYSBA, was designed to showcase New York State’s fast-growing craft beer industry. The number of craft beverage manufacturers holding farm licenses in the state has grown by over 500 since 2012, and currently 792 farm manufacturers are operating in the state, an increase of over 180 percent since 2012.

The passport program to promote the trail was officially launched by New York Governor Andrew Cuomo. The program and app not only promote brand recognition and foot traffic for breweries along the Empire State Trail, but also promote NYSBA’s public-facing activities—among the benefits app users can obtain with passport points are tickets to NYSBA’s events throughout the state.

Incorporating the passport program into NYSBA’s existing app was a natural and strategic fit, said Susan Erickson of Brewers Marketing. “We already have a productive working partnership with NYSBA through our development of the official New York Craft Beer App,” she explained. “The app already allows craft beer lovers in New York to find nearby breweries, see their operating hours and location details, organize and plan brewery tours, and share their experiences on social media. The Empire State Trail passport program engages the same active audience and incorporating it into the app makes logical sense.”

“We’ve always enjoyed working with Brewers Marketing,” said Paul Leone, executive director of NYSBA. “We were the first state to sign up for an app with them, and we’ve enjoyed the experience. When New York State proposed the Empire State Trail passport program to us, we knew Brewers Marketing would understand what we needed and get right on top of it.”

Leone sees the new passport program as a potential catalyst for growth. “We already have 20,000 downloads of the app. With the state promoting the beer trail and the app, we hope to double that to 40,000 downloads next year.”