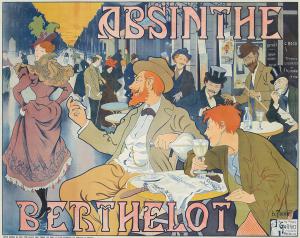 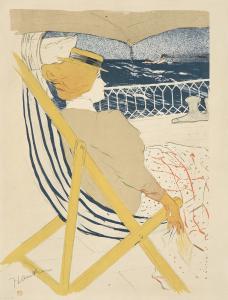 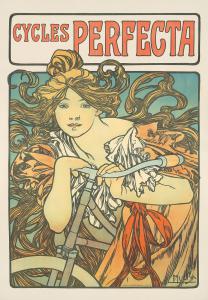 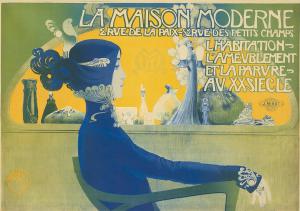 The auction provided enthusiastic acclaim for important works of the Art Nouveau and Art Deco eras. It was held online and at the gallery in New York City.

Jack Rennert, President of PAI, said, “The most significant aspect of this sale was the return of Art Nouveau following declining interest in previous years. This renewed passion is evident in record sales of Orazi’s ‘La Maison Moderne,’ Thiriet’s ‘Absinthe Berthelot,’ and continued interest in Mucha and Toulouse-Lautrec.”

The highest bid at auction—and perhaps the most unexpected triumph—was for Henri Thiriet’s ca. 1898 “Absinthe Berthelot,” a rare Belle Epoque design depicting a bustling outdoor café scene. Its estimate of $30,000-$40,000 was swiftly surpassed with animated bidding, and the lot was finally won for $108,000 (all prices include sales premiums).

Perhaps no other artist is more emblematic of Art Nouveau’s prowess than Alphonse Mucha. His 1902 “Cycles Perfecta” exudes the decorative style and expressive spaghetti hair that made him famous. While estimated at $17,000-$20,000, bidders were fervent, resulting in a $36,000 sale to a bidder in the room—and exuberant applause followed. Rarer works by the Belle Epoque master were similarly desired; his theatrical “Princezna Hyacinta,” from 1911, blew away the estimate of $25,000-$30,000 for a grand $48,000.

Leonetto Cappiello, whose work informed both Art Nouveau and Art Deco, also delighted bidders. His very first poster—“Le Frou Frou,” from 1899—is testament to the artist’s innate lithographic skill; estimated at $5,000-$6,000, it was sold for $7,800. For the first time in PAI’s history, his 1907 “Congrès International des Étudiants” was available, and collectors were thrilled. With an estimate of $3,000-$4,000, the Dionysian scene was won for $5,520.

Despite these notable sales, there are always some disappointments. Rennert explained his dismay about low sales for Cuba’s first revolutionary posterist, Eladio Rivadulla: “While a specialized niche, I am disappointed that the historical importance of these documents was not recognized.”

All in all, though, PAI-LXXIX was a resounding achievement.

Poster Auctions International’s next sale will be held in New York on February 23, 2020. Consignments are accepted until December 1, 2019.