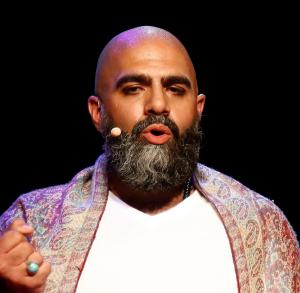 Futurist and keynote speaker, Xerxes Voshmgir explores the current exponential revolution – the merging of humans and machines and a post-capitalistic economy.

KLAGENFURT, AUSTRIA, September 23, 2019 /EINPresswire.com/ — Xerxes Voshmgir shares his astute observations and his vision of our future in his TEDx talk, “The AI Revolution is Beyond our Matrix.”

Born during the Iranian Revolution, Xerxes Voshmgir’s life and preoccupation – with revolutions and the future – were shaped from the start. Currently, Voshmgir is grappling with the "superhuman revolution,” the fusion of human and machine and a new type of economic system.

In his talk, presented to enthusiastic listeners at TEDxKLU in Klagenfurt, Voshmgir weaves a compelling narrative of the revolutionary changes and developments of our time. He offers an unique characterization of artificial intelligence (AI) as the next step in human evolution, and poses the big question at the heart of the revolutionary change: What rules do we want to program into AI?

The first law of robotics states that robots may not harm humans. This makes it all the more confounding as to why the human-made economy – capitalism – and the community that buys into it, continue to destroy the planet. In his TEDx talk, Voshmgir poses thought experiments for how new rules for a future economic system could be formulated and their implications for the global economy and human well-being. He envisions an economy that is no longer defined by profit, but rather purpose. In a word, he envisions a blockchain-based post-capitalist economic system that can be conceptualized, reinvented, and implemented independently of the current system.

Xerxes Voshmgir challenges the audience to think deeply about the future world he envisions, leaving them hopeful to play an essential role in making it happen.

Born in Iran in 1978, Voshmgir studied philosophy, politics, and economics (PPE) at the University of East Anglia before working as a business consultant for 15 years. In 2015, he founded Metamorphosers, a group of thinkers and pioneers who develop innovative projects. Voshmgir is also a member of the think tank “Viennese Thinker Circle.”