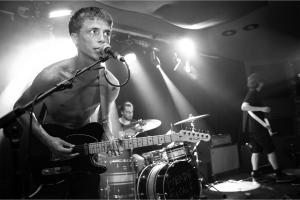 We’re an Immersive First Label, everything we do is about reinventing the use of spatial mix and mastering tools”
— Ray Mia

LIVERPOOL, UNITED KINGDOM, September 13, 2019 /EINPresswire.com/ — SPILT’s latest immersive track – SOMEONE n NO ONE – is out on Jacaranda Records today.

Landing slap-bang in the middle of a string of releases from the reimagined record label, SPILT’s performance of the oscillating track at this year’s Future Yard festival left the audience in a psychedelic trance, cementing their growing reputation as the ambidextrous masters of the Northern mosh pit.

Quintessentially SPILT, the track seizes an opportunity to push binaural technology to the edge of its capabilities and beyond to forge an all-enveloping experience, carrying the listener on a wave of dissonance to the inevitable conclusion that we are all – all of us – SOMEONE n NO ONE.

“We’re an Immersive First Label, everything we do is about reinventing the use of spatial mix and mastering tools, the binaural mixes we are releasing sit downstream from some groundbreaking work in Dolby Atmos, what’s even more impressive is the speed and ingenuity of the guys in SPILT, their music already lends itself to a richer immersive playback, the thinking behind the mixes take people on a journey – a story in words and notes and arrangement, movement and a relentless attack…"

“SOMEONE n NO ONE is raising the bar again, as they have done with every one of their current releases, there is simply no other Immersive Audio mixing like this anywhere… but as we’ve always maintained, you have to see it live to believe what they are capable of. The binaural mixes are stand out, their live performances are Shamanic in their effect, and we captured them in a Jacaranda Basement Tape – you get the energy, the dynamism, the power and drive – the small stage and the minimal lighting with no audience gave them the room to play like very few people can play in this day and age. All in one take, with no in-ears… they are a phenomenon. Check out the lyrics for the track, then look at the verve and dexterity they have in delivering those lyrics – no backing track, no fancy front of house set up, just raw – bleeding-edge talent. The immersive material only makes sense when it gets driven with such passion and tenacity. They are getting better and better…”

SOMEONE n NO ONE was performed by SPILT, and written by Morgan Molyneux, Ronald Ayres & Josh Cunningham.

From Immersive-first Label Jacaranda Records, specialists in spatial audio, the SOMEONE n NO ONE binaural master provides anyone using a set of standard headphones a three-dimensional audio experience – and richer stereo for anyone using speakers. The track is available to stream or download via Spotify, Apple Music, Amazon, Deezer and all major streaming services.

Jacaranda Records is a reimagined record label driven by immersive audio, with a street network of live music venues and record stores in the heart of Liverpool – The UK's music city.

Working with a wide international coalition of musicians, producers, managers and audio visual experts, the label provides a disruptive antidote to the traditional music industry ethos, forging new approaches to music creation, manufacture, promotion and distribution that leave control and revenues firmly in the hands of our artists.

We provide developing and established artists with a range of creative, technical and monetization services while preserving their full mechanical, publishing and IP rights. Artist focused, forward-thinking and expert in deploying innovative technologies and techniques through every stage of the recording, release, distribution and commercialisation cycles, the label works with a diverse range of creatives and performers to maximise the impact and returns for their work, all the while re-imagining, re-inventing and re-defining what impact and return means.
The latest evolution of the brand that launched The Beatles, Jacaranda Records is taking the soul of an organisation built on launching talent in a City where music is in its DNA, and forging a new path to support and build on the breadth of talent that walks its streets – all with an attitude and vision befitting its people and the global audiences who care about music.

SPILT – SOMEONE N NO ONE (Binaural Mix)