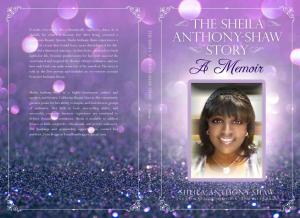 The Sheila Anthony-Shaw Story: A Memoir

“Sheila is thrilled to share her inspiring personal journey,” stated Fran Briggs, Publicist to Sheila Anthony Shaw. "Viewers of the show will be awed by her struggles, victories, and resiliency. And, they'll be inspired to recalibrate what they believe is possible for their life. This story illustrates that we all have the ability to do just about anything."

The former Miss Fresno California beauty queen is the author of “The Sheila Anthony Shaw Story: A Memoir.”

The book chronicles the author's humble beginnings of moving from Houston, Texas to Fresno, California with her mother and four siblings. She was three years old. It covers death-defying events, as well as significant and life transforming accomplishments intended to challenge, educate, and inspire others.

In her memoir, Sheila Anthony Shaw describes her year as Miss Fresno County’s beauty queen; being slighted by the love of her life days after losing their unborn child; a heartless doctor who rather remove her reproduction organs than address her ruptured appendix, and driving alone across the San Francisco-Oakland Bay Bridge, then suddenly not being able to use the gas, or brake pedals.