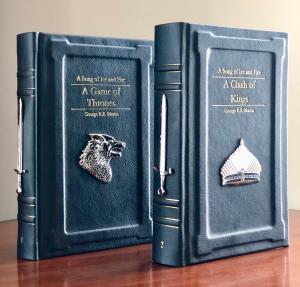 “A Game of Thrones” and “A Clash of Kings” Rebound 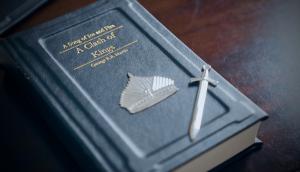 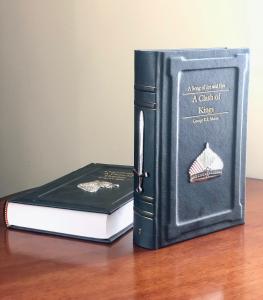 Artem Charta raises more than $30,000 for the new, rebound collector's edition of "A Clash of Kings" by George R. R. Martin, the sequel to "A Game of Thrones”

We’re excited to have reached this level of support for these collector-quality books for the series and hope to reach even more lovers of Martin’s work as crowdfunding continues.”
— Michael Roy

RALEIGH, NC, UNITED STATES, May 15, 2019 /EINPresswire.com/ — As fans anticipate the completion of the book series by George R.R. Martin, the author of “A Game of Thrones,” Artem Charta is finding success with fantasy readers on Kickstarter – raising more than $30,000 so far for the rebound collector’s edition of Martin’s sequel, “A Clash of Kings.”

“We’re excited to have reached this level of support for these collector-quality books for the series and hope to reach even more lovers of Martin’s work as crowdfunding on Kickstarter continues into its final week,” Artem Charta Founder Michael Roy. "I love this series and, based on their support of our campaign so far, so do the fans.”

Roy has perfected a re-binding process that can produce batches of high-quality books, with metal accents and accessories that display elements of the story.

The rebound book comes with some unique features, magnetic metal sword bookmark, a completely new bespoke sewn binding to give the volume strength, a unique metal emblem on the front of the book surrounded by a raised border, and with accents on the binding and the title stamped deep into the cover.

“My biggest challenge was creating something both stylish and affordable for consumers, and I think we achieved our goal,” Roy said. “We were able to source quality materials, cast metal emblems and accents that all came together nicely and we were still able to put the price in reach of consumers.”

Artem Charta proved the rebound concept worked with the company’s first release of “A Game of Thrones.” Upon successful funding, the company plans to continue launching leather bound versions of the rest of the books in Martin’s series.

“We’re launching one book at a time because it gives fans a chance to build their collections a little bit at a time, and it also allows us to give our full attention to the quality of each book individually without getting overwhelmed by too many new editions at once,” he said.

Roy says supporters of the current crowdfunding campaign will receive the books this August.

"The fans I've talked to so far love the idea, and the collectors who have received their copies have given some very high praise,” Roy said.
Roy notes that the company’s rebinding process for the books starts with a completed trade paperback, which the company purchases a retailer in its final form just as the end customer does.

“From then on, it’s just rebound, so backers can be assured these are created totally legally,” Roy said. “Everyone involved with the writing, publishing, printing and any other aspect of the book gets proper credit because the book is bought in its final form."

For more information, or to purchase the rebound collector’s edition of the book visit the A Song of Ice and Fire: “A Clash of Kings" Campaign Page on Kickstarter.