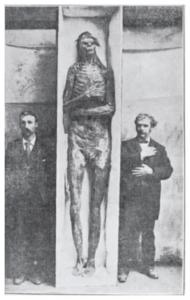 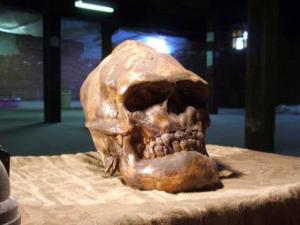 Skull Found in the vicinity of Lovelock Cave

REDWOOD CITY, CA, US, May 14, 2019 /EINPresswire.com/ — The Company is moving forward in starting filming for the third in the Brutal Bigfoot contract. The first in the series was released August 2018 and can be purchased on Amazon. The team completed filming for the second of the series in November. The distributor is looking forward to receiving the first cut and has requested status on the third in the series.

One of the questions that will be a big part of the third film is "Have all the red-haired giant “cannibals” at Lovelock cave Nevada been killed or have some survived the battle and are now roaming their old stomping grounds?" This question will be thoroughly explored. In order for the team to plan their expedition they had to determine which migratory paths are active to provide the best possible chance of sighting and filming the creature. This year, one of the active paths leads through Nevada near the Lovelock cave region. This area has a rich history according to the Paiutes that reside their.

Redwood City, California, The Real Bigfoot Hunter Tom Biscardi has been contacted by several people from the Lovelock Nevada area who have recently seen large human-like footprints in the dirt left by red-haired giants observed by the eyewitnesses.

The locals are scared and reached out to the one investigator who has had multiple documented encounters with similar creatures for his assistance. They have requested that he and his team come out and investigate the area to ascertain if the residents are in any danger. They want the team to determine if some of these creatures have survived.

Knowing that the suspected ancestors of these creatures were cannibals, these eyewitnesses want to know if they and their families are in any eminent danger. There is a colorful history of large hairy creatures in the area. Many Native American tribes from the Northeast and Southwest still relate the legends of the red-haired giants and how their ancestors fought terrible, protracted wars against the giants. https://ironlight.wordpress.com/2010/07/10/nevadas-mysterious-cave-of-the-red-haired-giants/

Ray Crowe made the following statement about skeletal finds:

“Near Lovelock, Nevada, guano hunters found giant bones of a race of people with red hair still attached to their skulls. Local Paiute legends tell of the warlike cannibal Tule eaters that were forced into a cave and a fire set at the mouth of the cave to exterminate them. The author once saw one of these 7’4” skeletons with some remaining wisps of red hair on the skull. The Mark Twain Museum in Virginia City, Nevada, had the seven-foot-tall skeleton that reportedly had been found in a cave by miners in the hills on the west side of Washoe Lake in the 1950’s. It has since been repatriated by local tribes in 1992.” Ray Crowe, Bigfootology “Quoted from The Track Record: A Bigfoot Encyclopedia”

The Godfather of Bigfoot Hunters who has in excess of 50 years’ experience in this genre including seven personal sighting during this tenure and made 8 movies 3 of which were award winning, Best Documentary, Bigfoot Lives, Bigfoot Lives 2 and Anatomy of a Bigfoot Hoax. Mr. Biscardi is scheduling and deploying his live extraction team to the area mid-June and will stay there until he gets answers for the people who contacted him.

Mr. Biscardi believes that this could be a divine intervention of historical proportions for the people searching for Bigfoot. He and his team will invite all responsible individuals, i.e., certified TV, Press, radio and news teams to document this historic event. He also plans on streaming updates when and where service is available to keep the public informed of what has been found.

For those journalists, anchors and other media personnel who would like to be a part of this historic event contact the team at bgft@searchingforbigfoot.com.