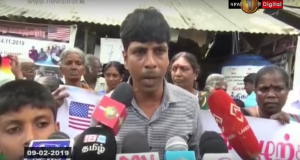 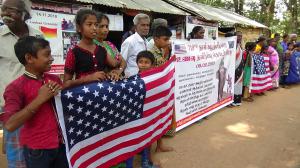 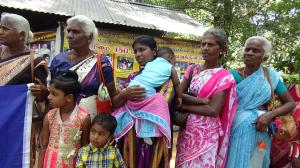 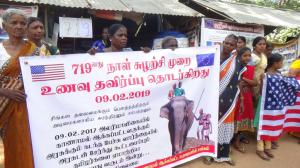 Expedite our justifiable requests ASAP, otherwise the majority of Tamils will continue to be oppressed and many will "disappear."

VAVUNIYA, NORTHERN PROVINCE, SRI LANKA, February 10, 2019 /EINPresswire.com/ — The Tamil Parents of Disappeared Forum wrote a letter to UNHRC member states to help send Sri Lankan war crimes to International Criminal Court. The general secretary, Mr. Gopal Rajkumar, stated that “It is important to have a referendum that gives Tamils’ choice regarding their preferred form of government. A UN Peace Keeping Force is needed immediately to replace the Sri Lankan military occupying in the Tamil Homeland."

Here is the full text of the letter "Their struggle to find the missing children":

Excellencies,
We, the undersigned Tamil mothers of missing children, write to urge you to support the following:
1. Refer the Sri Lankan War crimes to International Criminal Court.
2. Hold a UN sponsored Referendum to determine the political solution for the Tamils who live in their ancient Tamil homeland in the north-east of Sri Lanka as UN did in South Sudan in 2011.
3. Send UN peace keeping forces to replace the Sri Lankan military in the Tamil Homeland (North-East of Sri Lanka)

We the Tamil mothers of missing children, have been protesting in Vavuniya since March 2016. Today, the day we write this letter, is the 719th day of protest. As part of our protest, we have been fasting by skipping our one meal per day.
We lost friends who were protesting with us, the mothers of abducted, who died because of the extreme psychological effect on them. Unless there is an investigation by reliable sources like the ICC, the situation will get worse among the mothers and with their health.

Our children were teens when they were abducted by Sri Lankan military in 2009; now they are in their twenties. We know they are alive somewhere in Sri Lanka. We have some information about where they have been kept by the military. Only powerful external sources like the ICC can find them. If the major Sri Lankan war criminals would be taken by the ICC, all the information would start to come out like melting snow. So, we kindly ask you to refer Sri Lankan war crimes to the ICC. It will give us justice to us what we are longing for.

The Sri Lankan army is controlling the Tamil economy, culture, our farm, homes and everything. The army spreads violence through financially affected Tamil youths and allows drug dealers to sell their drugs to Tamil youths. It is destroying our Tamil boys and girls in order to prevent the Tamils’ democratic participation and protest. Because of the Sri Lankan military presence, Sinhalese settlements, and the building of Buddhist shrines, the Sinhalization of the Tamil village has been taken place. The Sri Lankan Military is holding Tamil women and men as sex slaves in their camps. It is part of genocide and destruction of a race.

It is the time to send a UN force to the Tamil lands in the north-east and replace the Sinhalese military.

Sri Lankan Sinhalese leaders had told several times that no army or any war criminals will be punished. The last seventy years have been the painful story of the Tamil struggle to live freely without oppression.

After killing more than 148,000 Tamils in 2009, these Sinhalese leaders have told us that there will be no sharing of political power with the Tamils. It is now time to hold a referendum to find what Tamils want as a political solution as the UN did with the South Sudan.

We want to expedite our justifiable requests ASAP, otherwise the majority of Tamils will continue to be oppressed and many will "disappear." Ancient Tamil culture faces extinction.

Thank you,
Signatures of the Parents of Disappeared: