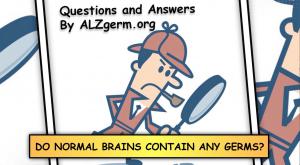 Do Normal Brains Contain Any Germs?

A new video series by Dr. Leslie Norins answers the public's most pressing questions about the possible role germs play in Alzheimer's disease.

Brains of perfectly normal people, surprisingly, contain viruses and bacteria. So, any invading Alzheimer’s germ would add to these.”
— Dr. Leslie Norins

NAPLES, FL, UNITED STATES, September 20, 2018 /EINPresswire.com/ — Alzheimer’s Germ Quest, Inc., announced it is posting eight one-minute videos—one per week—to answer some of the questions most frequently asked by the public about its proposition that a germ might be the cause of Alzheimer’s disease. The respondent is the Quest’s CEO, Leslie Norins, MD, PhD.

The initial video asks, “Do Normal Brains Contain Any Germs?” Dr. Norins explains that “Brains of perfectly normal people, surprisingly, contain viruses and bacteria. So, any invading Alzheimer’s germ would add to these.”

Also in the queue are questions such as “Could There be an Antibiotic for Alzheimer’s?” and “Could Alzheimer’s be Transmitted to Caretakers?” Simple language is used to aid comprehension of the material presented.

“Almost no research on possible infectious causes of Alzheimer’s is funded by government agencies despite $2 billion in research money given to them by Congress to solve this disease puzzle. Advocacy groups equally ignore funding investigations of infectious agents,” says Dr. Norins.

The short videos were produced in response to many inquiries from the public, which included encouragement of further investigation of the germ possibility.

Dr. Norins, a 44-year medical publisher, in his early career directed a research laboratory at the federal Centers for Disease Control and Prevention. Two years ago he became interested in Alzheimer’s disease, and upon reviewing the scientific literature was surprised to find possible infectious triggers had been little explored.

Alzheimer’s Germ Quest, Inc. is a public benefit corporation headquartered in Naples Florida. Its mission is to accelerate and deepen scientific investigations into the possible role of infectious agents as the root cause of Alzheimer’s disease. It is the sponsor of the $1 Million Alzheimer’s Germ Quest Challenge Award for scientists. (ALZgerm.org).

Do Normal Brains Contain Any Germs?